The Supreme Grand Council of the Eastern Jurisdiction of Canada

The earliest mention of the Cryptic Rite in Canada is to be found  in the City Gazette published in Saint John, NB on 13 February 1828: " A quarterly meeting of the Council of Royal and Select Masters will be held at Mason Hall on Thursday evening at seven o'clock."
This Council was undoubtedly inaugurated by one Samuel Kidder, a lecturer and ritualist of ability from Massachusetts , who visited Saint John late in 1826 with authority from the Grand Master of the Grand Council of Massachusetts, established in June, 1826.
Nothing further respecting this early Council has since been discovered and the names of early members are unknown. A tradition persists that this Council held quarterly meetings until 1837 when a fire destroyed its records.

In 1866, the Hon. Robert Marshall of Saint John received the three degrees of the Rite in a Council of R. & S.M. at Baltimore with the view to establishing the Rite in Canada.
Later he secured the issue of three charters by the Grand Council of Maine - Edward P. Burnham, Most Puissant Grand Master, dated 8 May 1867, and was himself authorized to constitute the Councils and install the Officers; assisted by Companion Gordon R. Garden Past Grand Master of Maine Companion Marshall on 12 August 1867 constituted:
Saint John Council # 1 (William Donald D.D. TIM)
New Brunswick Council # 2 (Robert Marshall TIM)
Carleton Council # 3 (John V. Ellis TIM)
Saint John Council # 1 lost its charter and property in the Great Fire of 20 June 1877, and became dormant from that date until 12 February 1892, when the Council was revived by the surviving members with William B. Wallace as TIM. It has continued to be on the active role of Grand Council to this day.
New Brunswick Council # 2 also lost its records in the Fire of 1877, but was revived in 1894 and continued until 1902 when it amalgamated with Saint John # 1.
Carleton Council # 3 although with a small membership continued to hold its meetings in Saint John West into the twentieth century. It has since gone into darkness.

The period 1875 to 1890 was marked by little activity due in part to the Great fire in Saint John, NB in 1877, the business depression of the period, a lack of candidates and the optional nature of the degrees. However, Companions David R. Monroe and John V. Ellis of Saint John continued their work both in Carleton Council and the Grand Council of Ontario. During the period Companion W.D. Gordon of Fredericton was appointed Inspector General for the Eastern Provinces.
In 1880 the Grand Council of Ontario proclaimed itself the Grand Council of the Dominion of Canada with jurisdiction over all Councils of the Cryptic Rite, all Conclaves of the Order of the Red Cross of Constantine and all Lodges of Royal Ark Mariners of Canada. In 1885 it agreed to confine its jurisdiction to only the Cryptic Rite. 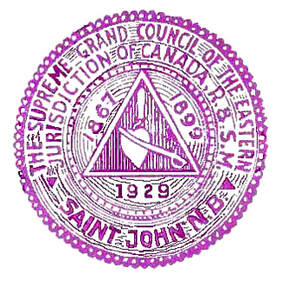 ​The history of the Grand Council Royal and Select Masters Eastern Jurisdiction is reflected in the Grand Seal. The years shown on the seal represent the following:

The reference to Saint John, NB points to the source of our beginnings.